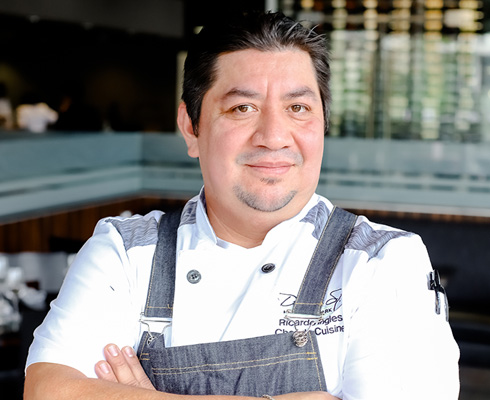 As Chef du Cuisine, Ricardo collaborates with Chef Holley in creating new menu items, managing the kitchen staff, and facilitating the execution of the kitchen in its entirety. Ricardo began working with Chef Holley at Brennan’s, then joined the team at the iconic River Oaks restaurant, Pesce. He began as a food runner, but after two weeks, found himself working his way through every station in the kitchen, becoming a kitchen lead in just a year. From 2004 to 2015 Ricardo mastered his skills as a kitchen manager and sous chef at the premier Houston restaurants of Café Jade River Oaks, Sorrento Restaurant, and Fleming’s Prime Steakhouse & Wine Bar. He then rejoined Chef Holley at his namesake, Holley’s, until its closure. Ricardo’s spare time is best spent time with his family. He traces his love for cooking back to the 7-year old boy in Acapulco, Mexico eager to help his mother in the kitchen at her restaurant of 15 years. Ricardo prides himself on creating unique seafood dishes, most commonly with significant flavors from Mexico.